On the 7th of January 2022, St. Louis 1 Catholic Senior High School Surabaya celebrated Christmas and New Year’s Day together in an event called CHERISH: The Magic of Christmas. The event was hosted by St. Louis 1 Catholic Senior High School’s student council, specifically, the Social and Spiritual Department (SOSROH). Leading up to the event, an escape room game, Santa’s Codes, was run, as well as the letter-exchanging Santa’s Mailbox. It all ended in the climactic drama “A Christmas Wish”, performed by members of St. Louis 1’s Student Council. In addition, the event also included “Merry Cliquemas” and “Christmas Melody”, performances by St. Louis 1’s dance team, Clique, and Sinlui Choir.

The first event in CHERISH started on the 4th of January 2022, with the escape-room-style Santa’s Codes. 20 teams of three were invited to stop the evil Pitch Black from destroying Christmas Day. The rally game tested the participants’ ability to solve logical riddles and codes in every stage as fast as they could. Three teams came out victorious: Apotik Guardian achieving first place, Masako Mantoel second, and Santa’s Bestie third. The 17 eliminated teams battled for points in the additional Minigames to achieve one last coveted prize. At the end of the day, KAPEKA won the fourth prize for Minigames. The second event, Santa’s Mailbox, might not have been as conspicuously upfront as its companions, but it was no less exciting. After all, the anonymous nature of the letters provided an interesting opportunity for confessions and secret-messaging. The event ran from the 25th of December 2021 to the 7th of January 2022. The cumulated letters were then posted on the Student Council instagram page on the 8th and 9th of January, 2022.

Last but not least, St. Louis 1’s Student Council prepared a drama titled “A Christmas Wish,” streamed live on Youtube on the 7th of January 2022. It featured a story within a story, first introducing Lily as a girl who’d lost her Christmas joy and spirit. Through a snowglobe, she was brought to the world of the Guardians, based on the movie The Rise of The Guardians. Santa Claus told her that an evil entity called Pitch Black was destroying Christmas by turning dreams into nightmares. But Lily didn’t have the motivation to help them.

Cue the musical drama “A Christmas Wish”: a story about two young girls with antithetical lives. In a plotline perhaps reminiscent (and paying homage to) Freaky Friday, the two girls swapped lives as a result of their wishes. They lived a week in each other’s bodies. The first few days started out great, until they realized how much they’d missed their own lives. After the week’s end, they learned a valuable lesson: to be grateful for both the ups and downs of their lives, as no one’s life is perfect.

The audience was transported back into Lily’s world. With her newfound determination and moral lesson learned, Lily and several other kids confronted Pitch Black. They were no longer afraid of them. With no fear to feed on, they defeated Pitch Black and saved Christmas. With that, the St. Louis 1 family wishes you all Merry Christmas and Happy New Year 2022. May you remember to cherish the love, joy, and magic in your lives. 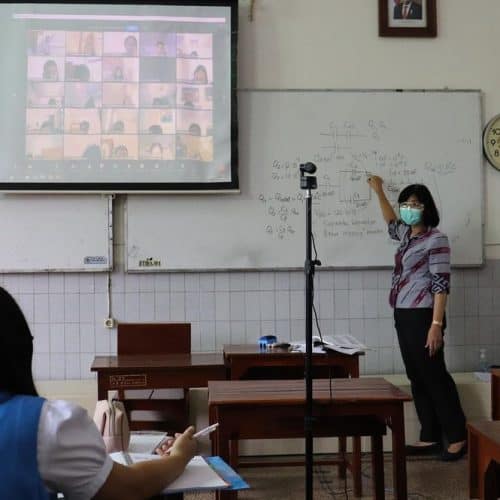